In addition to perfect conditions, the Eagle Mountains offer keen bikers strong stories. For example, those about remarkable bunkers that were built in the 1930’s to protect the inhabitants against enemy neighbours.

„You can set off from Šerlich Saddleback in the northern corner of the Eagle Mountains. Leave a hill called Vrchmezí to climb the highest peak of these mountains – Velká Deštná. You can fully enjoy a perfectly prepared trail and the best parts of the Eagle Mountains. You will reach a peak called Jelenka, where you will discover a small light fortification made of reinforced concrete, called “řopík” in Czech. It is open to the public so you can become fully absorbed in the atmosphere of the stories that took place there. Imagine seven men jammed inside, who had only two loopholes and tonnes of concrete above their heads. These fortifications only rarely aimed towards enemy territory, they were usually intended for side firing. It is interesting that the “řopík” was practically indestructible at that time. How depressive it must have been for the soldiers who arrived there within the mobilisation in 1938? In Koruna you will have a gorgeous view of the Eagle Mountain ridge. Not far behind Střední vrch (Middle Hill) you will take a path that goes via Tetřevec to the Kunštát Chapel, and via Mezivrší you will get to an infantry log cabin called Průsek. The two-storey heavy fortification construction for 29 soldiers is unusually well-preserved and full of historic equipment. The Eagle Mountains are literally spotted with remnants of once perfect fortification – trenches, moats against tanks. These mountains had an important defensive importance, breaking through their line was out of the question. Do not miss an artillery fortress called Bouda, which is one of five completed constructions of the heaviest type of fortification, a popular fortress called Hanička and a nicely reconstructed log cabin called Průsek. This trip provides a perfect combination of beautiful countryside and magnificent views, but also a unique atmosphere of the Czechoslovak fortification stories. The Eagle Mountains are simply worth visiting.“ 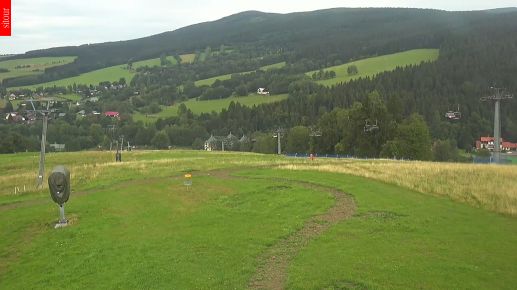